SILICON VALLEY, CA, Nov 17, 2009 - Proxim Wireless Corporation, a leading provider of end-to-end broadband wireless systems, and Systems Integrated (SI) announced today that their deployment of the County of Los Angeles Department of Public Works' wireless communication system earned a 2009 National Association of Counties Achievement Award. This honor is presented each year to county officials, their employees and the counties themselves to recognize the creativity and imagination of counties across the nation. The desire and need to provide communications to traffic signals throughout LA County resulted in SI's design and implementation contract of a Proxim wireless network. This deployment is a key element of LA County's expansive Intelligent Transportation System (ITS) program, which is dedicated to reducing smog and traffic congestion with technology.

Wireless radio installation reduced both the set up and operating costs for signal communication while also assisting the County's goal to reduce traffic problems for the travelling public. The County of LA estimated that utilization of Proxim's wireless technology to connect the 1,000 traffic intersections saved the County's ITS program $7 million in costs over traditional copper or fiber optic installations. Additionally, the County of LA estimated that the use of Proxim's radios will save the County $708,000 annually versus the cost of leased telephone lines.

"The ability to deploy a wireless communications network for monitoring the operation of 1,000 traffic signals is a huge enabler of productivity for LA County, and will go a long way towards the County's goal to reduce congestion and enable real-time traffic signal monitoring," said John Holbrook, General Manager of SI. "We've found that Proxim's broadband wireless technology not only provides the best performance for delivering bandwidth intensive applications like video, but it is also the most cost-effective solution on the market. As a result, we have used Proxim's equipment exclusively throughout this deployment." 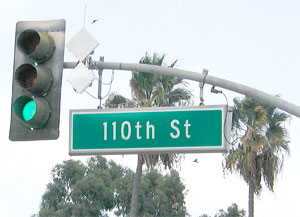 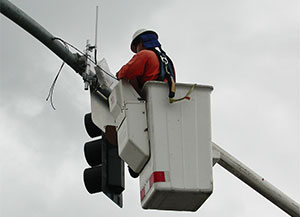 Overall, more than 1,200 Proxim Tsunami MP.11 point-to-multipoint radios will be deployed for 1,000 traffic signalized intersections across the County. Approximately 30 of the signalized intersections will be equipped with one or more video cameras to enable remote monitoring of traffic flow. The cameras will also supply needed data from the intersection to enable remote adjustment of traffic signal timing if appropriate for flow optimization.

The County's Traffic Management Center (TMC), located in Alhambra, is a high tech facility which combines multiple technologies and software systems. The primary purpose of Proxim's broadband wireless communication system is to provide communications for the County's Kimley-Horn Integrated Traffic Systems (KITS) software. Combined, these systems have enabled County and City staff to monitor traffic signals, react in real time to traffic problems and if necessary, adjust traffic signal timing from the TMC to relieve congestion for commuters through more than 30 cities in LA County.

"More cities and counties are realizing that wireless technology can save them a lot of money in both up front and recurring costs, and in the case of LA County, wireless technology was able to help save $7 million in costs up front, and an additional $708,000 annually -- money which can now be reallocated to education, healthcare and other endeavours," said Pankaj Manglik, CEO of Proxim. "Especially in these economic times, the ability for cities and counties to save money on IT costs enables them to put that money where it's truly needed. And as we've seen with LA County and others, wireless technology not only saves the county money, but it is a great enabler for Intelligent Transportation Systems (ITS), which increases the quality of life for citizens by reducing smog and their commute times."

About Proxim Wireless
Proxim Wireless Corporation (OTCQX: PRXM) (PINKSHEETS: PRXM) is a leading provider of end-to-end broadband wireless systems that deliver the quadruple play of voice, video, data and mobility to all organizations today. Our systems enable a variety of wireless applications including Point-to-Point wireless backhaul, security and surveillance, VoIP, last mile access, and enterprise LAN connectivity. We have shipped more than 1.8 million wireless devices to more than 235,000 customers in over 65 countries worldwide. Proxim is ISO-9001 certified. Information about Proxim can be found at www.proxim.com.