Mimosa is a different kind of moonshot, one right on the ground that reimagines how people will get amazing internet access via wireless across the globe. To tackle a challenge of this magnitude, we’ve brought together the industry’s brightest leaders, with experience from some of the most disruptive technology companies.

Our passion is evident. With a goal of not simply connecting more people to the internet, but making internet access even better, faster, and stronger than it is today, we are driven. We get things done with spirit, flair, courage, instinctive intelligence, and collaboration. Our team is made up of diverse talents and backgrounds and we strongly believe that these differing perspectives, ideas, convictions, values (and sense of humor) make our company stronger and our solutions better. 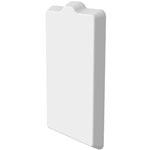 Pairing these incredible innovations with brand new, interference-free 6 GHz spectrum, the A6 can deliver gigabit+ subscriber speeds needed for advanced rural broadband projects, and the high-scalability to tackle the most dense, urban NLOS areas cost effectively. 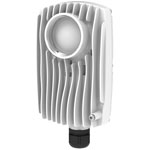 Building on the popular X-series family of modular directional antenna options for flexible distance deployments, the new rugged C6x sets a new bar for affordable speed and interference reduction. With the latest in Wi-Fi 6E OFDMA technologies, and access to new 6 GHz bands1, the C6x achieves extremely low latency speeds of up to 1.75 Gbps and high reliability with new noise fighting features. Supporting the Wi-Fi 5/6/6E standards, the C6x can be deployed as a standard Wi-Fi interoperable client, and provide smooth transitioning in the field for legacy Mimosa and standard Wi-Fi deployments. The C6x can be used as a PTMP (point-to-multipoint) client radio, or PTP2 (point-to-point) backhaul.

The C6x radio's native 8 dBi gain can be increased to 12, 16, 20 or 25 dBi using modular, X-series, twist-on antennas, offering the ease and simplicity of integrated radios, but with so much more flexibility.

The link reliability of the C6x starts with the high isolation design of the X-series antennas - but there's so much more that's new. Based on Wi-Fi 6E OFDMA technologies, the C6x reduces in-band noise impact across the operating channel with dramatically smaller 2 MHz resource units (RU) sizes instead of legacy OFDM solutions, where any noise impacted the full channel.

Previous OFDM technologies limited the scale of client deployments and the ability to deploy in dense, noisy areas. In PTMP client deployments, the C6x pairs together with new multi-user OFDMA scheduling and beamforming technologies on the A6 access point to enable massive subscriber scaling, advanced noise management, and access to the new low-noise 6 GHz band1.

While the C6x rugged IP67 design is built to withstand the elements, carrier-grade management capabilities with Airspan ACP and MMP enable operators to deploy and monitor with ease. Together with nextgen RF noise fighting features and new low-noise 6 GHz band support, C6x leads the way in dependable connectivity. 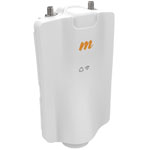 The A5x is well suited for short to long-range pole and tower point-to-multipoint (PTMP) applications, access point colocation (GPS sync), and Municipal and Rural Licensed Public Safety multipoint (4.9 GHz). In situations where the A5c connectorized 4x4 access point is too much or too powerful, the A5x is the perfect choice.")

With access point capacity of up to 700 Mbps (IP), the A5x delivers the speeds consumers and business users demand at a fraction of the cost of delivering fiber-to-the-premises.

Increased Capacity at Each Site

With integrated, high-precision SRS (GPS sync) technology, new A5x sectors can easily be added at existing A5 and B5 sites and reuse the same channel. This saves valuable, scarce unlicensed spectrum resources when new A5x devices are installed ``back-to-back'' on the same tower or pole.

Install, aim and go! We've eliminated manual installation and pre-provisioning complexity, so you can focus on adding subscribers quickly.

Rise above the noise with available extended frequency support from 4.9-6.4 GHz.

Mimosa Technology - What Sets Us Apart? 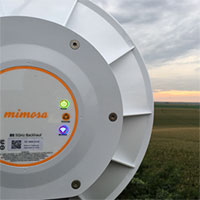 As Massive MIMO increases capacity, antenna beamforming is a crucial technology innovation used by an access point that allows spectrum to be reused by multiple clients simultaneously, radically improving the simultaneous capacity of the radios. Using precise geopositioning information from each client, wireless antenna transmit signals which are focused towards each unique client, achieving improved signal levels, and significantly reducing interference in the spectrum. Beamforming also creates spatial opportunities for additional MIMO streams to be used simultaneously, a technology known as Multi-User MIMO. In outdoor wireless, as MIMO technology grows from 1.5 up to 10 Gbps of capacity at the access point, MU-MIMO enables these powerful hubs to share that bandwidth to wireless clients to achieve even higher spectral efficiency.

Mimosa scales spectrum reuse beyond a single access point, stretching the benefits across an entire network. Current fixed wireless deployments typically require using the entirety of available multipoint spectrum as networks scale, quickly running out of necessary capacity and exhausting this precious resource. By synchronizing and coordinating all the clients in the network to communicate in unison, the “self interference” can be eliminated, opening up service possibilities in even the highest population density deployments. By using high precision GPS for synchronization in each access point, Mimosa maximizes spectrum capacity, and improves operation in heavier noise environments.

Operating a wireless network goes far beyond great wireless devices, it involves proactively handling the wide range of problems encountered in outdoor networking and wireless interference. Mimosa’s advanced cloud technology constantly keeps tabs on each device as well as network-wide spectrum conditions, to get the most out of scarce spectrum resources. While each Mimosa device is smartly self-aware, Mimosa Cloud services streamline the subscriber experience and optimize spectrum use network-wide. 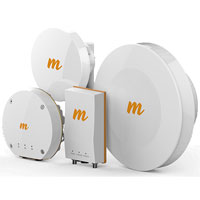 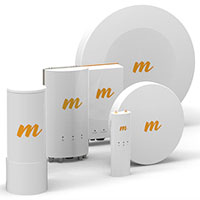 Are you interested in learning more about Mimosa products? Please fill out your contact info, and our sales team will get back to you right away with more details!

Get the best in application engineering and technical services from our Winncom engineers - holding over 100 industry-elite certifications! Call 1-888-WINNCOM for details!Get Professional Engineering Services Here!