Federated Wireless is a fast-paced, high-growth startup at the forefront of shared spectrum management, enabling efficient access to service providers to satisfy their growing mobile capacity demands. Headquartered in Arlington, Virginia, we were recognized with the 2019 US Visionary Innovation Leadership Award in the mobile communications market for our ability to anticipate unmet customer needs and proactively address them with solutions that complement next generation technologies for Enterprises and Operators while defining the standards and the entire ecosystem to bring the them to market.

Federated Wireless has a mature Partner Program that’s been in place for several years. With over 40 partners covering the who’s who of radio equipment providers, we pride ourselves on our open and neutral approach to the market. We provide both hands-on and automated training and support so that partners can get up and running quickly. What this means for customers is that testing and integration have taken place at our expense, not yours, so that deployments can happen quickly and cost-effectively. We provide an online training course for Certified Professional Installers so that partners, customers and system integrators have a one-stop shop for deployment readiness.

The emergence of the 3.5GHz Citizens Broadband Radio Services (CBRS) band and the underlying shared spectrum model has created a significant new opportunity for the wireless industry. The Federated Wireless Spectrum Controller offers spectrum-as-a-service to unleash the power of CBRS shared spectrum.

Sharing CBRS spectrum is made easy with our standards-based SAS implemented as a service in the cloud for efficiency, scale, and ease of deployment. Incumbents are protected as commercial users are given dynamic and secure access to the 3.5 GHz band. Access to interference-free bandwidth enhances wireless coverage options, creating new business models and service opportunities. 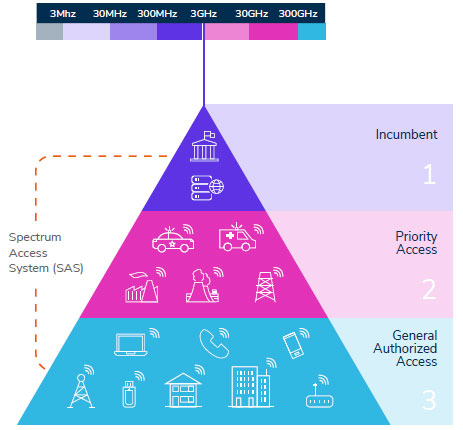 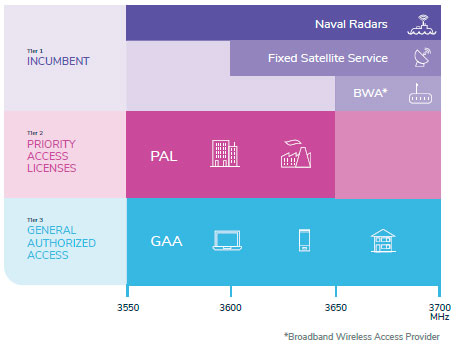 The SAS authorizes each PAL to use a 10-megahertz channel in the 3550-3650 MHz band, with no more than seven PALs assigned in any given license area at any given time. If there are any frequencies designated for Priority Access that are not in use by a Priority Access Licensee, the SAS may authorize and manage these to General Authorized Access Users. The SAS assigns authorized CBSDs to specific frequencies, which may be reassigned by the SAS as needed.

- Enforces the required Exclusion and Protection Zones to ensure coexistence between CBRS users and incumbent federal operations
- Protects non-federal incumbent users consistent with the rules (for example Fixed Satellite Service Earth Stations and grandfathered broadband wireless licensees until the end of the grandfather period)
- Protects Priority Access Licensees from interference by GAA users
- Facilitates the coordination and exchange of information necessary to avoid conflicting frequency assignments among all other SASs
- Ensures secure and reliable transmission of information among SAS, ESC, CBSDs and Domain Proxies while guaranteeing privacy requirements
- Manages CBSD power levels as per international agreements in areas adjoining borders with Mexico and Canada

What is a Certified Professional Installer (CPI)?

There are two types of CBRS devices (CBSDs): Category A and Category B. Category A devices are small, indoor, low power (1 watt) small cells with radios that operate in the 3.5 GHz radio band. Category B devices are designed to be used outdoors, operating at a higher power (50 watts) and often hung from street furniture such as light poles. The FCC has mandated that all Category B CBSDs must be installed by a certified professional to ensure that their location is properly registered with the SAS.

How Do I Become a CPI?

Federated Wireless offers a new online training program that provides system integrators and installers with all the information and documentation needed to become a Certified Professional Installer in accordance with the FCC rules. The modular program takes less than a day to complete and delivers a digital certificate that can be used for any CBRS installation, on any SAS, with any CBSD device.


How Do I Learn More?

Federated Wireless is a CBRS industry pioneer, with deep standards knowledge and a robust Spectrum Controller (SAS) platform. We have the only CBRS Partner Program in the industry. Our goal is to remove all friction from CBRS deployments, which is why we are offering this training program.

Get the best in application engineering and technical services from our Winncom engineers - holding over 100 industry-elite certifications! Call 1-888-WINNCOM for details!Get Professional Engineering Services Here!